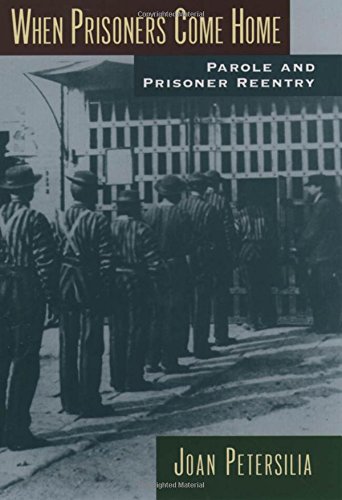 Get FREE 30 days by clicking the button below!

Every year, hundreds of thousands of jailed Americans leave prison and return to society. Largely uneducated, unskilled, often without family support, and with the stigma of a prison record hanging over them, many if not most will experience serious social and psychological problems after release. Fewer than one in three prisoners receive substance abuse or mental health treatment while incarcerated, and each year fewer and fewer participate in the dwindling number of vocational or educational pre-release programs, leaving many all but unemployable. Not surprisingly, the great majority is rearrested, most within six months of their release. What happens when all those sent down the river come back up--and out?

As long as there have been prisons, society has struggled with how best to help prisoners reintegrate once released. But the current situation is unprecedented. As a result of the quadrupling of the American prison population in the last quarter century, the number of returning offenders dwarfs anything in America's history. What happens when a large percentage of inner-city men, mostly Black and Hispanic, are regularly extracted, imprisoned, and then returned a few years later in worse shape and with dimmer prospects than when they committed the crime resulting in their imprisonment? What toll does this constant "churning" exact on a community? And what do these trends portend for public safety? A crisis looms, and the criminal justice and social welfare system is wholly unprepared to confront it.

Drawing on dozens of interviews with inmates, former prisoners, and prison officials, Joan Petersilia convincingly shows us how the current system is failing, and failing badly. Unwilling merely to sound the alarm, Petersilia explores the harsh realities of prisoner reentry and offers specific solutions to prepare inmates for release, reduce recidivism, and restore them to full citizenship, while never losing sight of the demands of public safety.

As the number of ex-convicts in America continues to grow, their systemic marginalization threatens the very society their imprisonment was meant to protect. America spent the last decade debating who should go to prison and for how long. Now it's time to decide what to do when prisoners come home.
...