The Business of Empire: United Fruit, Race, and U.S. Expansion in Central America (The United States in the World) 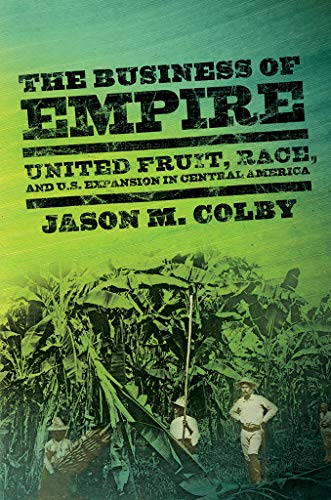 The link between private corporations and U.S. world power has a much longer history than most people realize. Transnational firms such as the United Fruit Company represent an earlier stage of the economic and cultural globalization now taking place throughout the world. Drawing on a wide range of archival sources in the United States, Great Britain, Costa Rica, and Guatemala, Colby combines "top-down" and "bottom-up" approaches to provide new insight into the role of transnational capital, labor migration, and racial nationalism in shaping U.S. expansion into Central America and the greater Caribbean. The Business of Empire places corporate power and local context at the heart of U.S. imperial history.

In the early twentieth century, U.S. influence in Central America came primarily in the form of private enterprise, above all United Fruit. Founded amid the U.S. leap into overseas empire, the company initially depended upon British West Indian laborers. When its black workforce resisted white American authority, the firm adopted a strategy of labor division by recruiting Hispanic migrants. This labor system drew the company into increased conflict with its host nations, as Central American nationalists denounced not only U.S. military interventions in the region but also American employment of black immigrants. By the 1930s, just as Washington renounced military intervention in Latin America, United Fruit pursued its own Good Neighbor Policy, which brought a reduction in its corporate colonial power and a ban on the hiring of black immigrants. The end of the company's system of labor division in turn pointed the way to the transformation of United Fruit as well as the broader U.S. empire....

The Business of Empire: United Fruit, Race, and U.S. Expansion in Central America (The United States in the World)