That Every Man Be Armed: The Evolution of a Constitutional Right (Independent Studies in Political Economy) 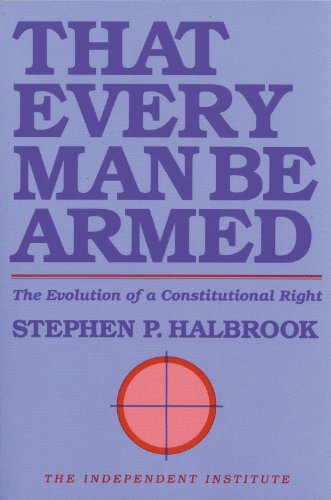 This is an authoritative study of the second amendment, using history and current-day analysis. It is one of the only scholarly works on the subject, but has proven widely accessible. Halbrook traces the origins of the Second Amendment back to ancient Greece and Rome, and then through the “freemen” movement in 18th-century England and France. He demonstrates that the framers of the Constitution were conscious of such history when they drafted the Second Amendment, and that the Second Amendment was clearly intended to allow possession of firearms not just for defense of personal life and property but also to prevent government infringement of human liberties. His meticulous, thorough scholarship demonstrates that the right to bear arms is as fundamental a right under the Constitution as freedom of speech and freedom of religion.
...

That Every Man Be Armed: The Evolution of a Constitutional Right (Independent Studies in Political Economy)