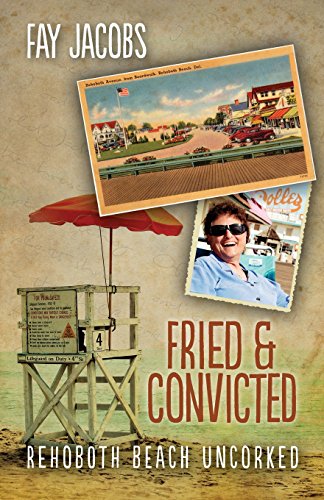 As the author of four humorous memoirs, activist and comedian Fay Jacobs returns with her newest tall tales, Fried & Convicted, Rehoboth Beach Uncorked. And, as you’d expect, It’s chock-full of Fay’s signature witty, wise, and often laugh-out-loud commentary about the craziness of contemporary life in the diverse and welcoming resort town of Rehoboth Beach on the Delaware Coast.

This time, though, everyone’s favorite “Sit-Down Comic” grapples with the insanity of a high-tech bra, cartoon bladders in prescription advertising, and refusing to act her age . . .

Fried & Convicted was written over the last few years and culminates with Election Day, 2016. It chronicles the joy of gaining equal marriage rights for same-sex couples, tales of Icelandic lagoons, Provincetown adventures, and much ado about lesbians of a certain age. It tells a few harrowing personal stories, such as Bonnie’s unnerving medical diagnosis, the time Fay went kayaking with alligators, and how she came up with a public relations scheme to rescue her pal’s purloined pooch. And through it all, she finds a way to make it provocative, political, occasionally heartwarming, and reliably hilarious.

Come along for the ride—you’ll be happy you did!

Fay Jacobs spent thirty years in Washington, DC working in journalism and public relations. Her latest project is a one-woman show, Aging Gracelessly: 50 Shades of Fay, which is being performed in theatres around the country. She lives in Rehoboth Beach with her wife of thirty-four years and a Miniature Schnauzer.
...